The Yale resources that provided the historical background to the trilogy, to Catherine Yale’s Diaries, have been considerable. I list them here only because so many readers have requested further materials. Materials to explore in more depth those fifty years covered by the novels. Fifty years of hugely turbulent upheaval both in Britain and in India.

So, for Elihu Yale in general, one main resource to provide the threads of the plot. And for the leads that eventually led me to both the real-life biography of Catherine Hynmers Yale. The fictionalised version in the novels as well. It was of course Hiram Bingham’s Elihu Yale for the American Antiquarian Society, 1937, and his 1939 biography of the same name. This latter has been an almost constant companion (warts and all) over the two years during which the Yale Trilogy was written.

Resources in The Doubtful Diaries of Wicked Mistress Yale (Part One)

For Madras and Fort St. George: Sources for the History of British India in The Seventeenth Century by Sir Shafaat Ahmad Khan; Vestiges of Old Madras, 1640-1800, East India Company Records, by Henry Davison Love; The Diaries of Streynsham Master, 1675-80, from the Indian Records Series and digitised from an original in the University of Minnesota; Fanny Emily Penny’s Fort St. George, Madras; the essay The English and Dutch East India Companies and the Glorious Revolution of 1688-89, by K.N. Chaudhuri and Jonathan I. Israel; Sati: Historical and Phenomenological Essays by Arvind Sharma; Madras in the Olden Times by J. Talboys Wheeler; the Honourable English East India Company’s Masulipatam Consultation Book, 1682-83; and A.K. Raychaudhuri’s Jan Company in Coromandel, 1605-1690.

For the politics in the period leading up to the Glorious Revolution, Simon Schama’s superb History of Britain, Part Two: 1603-1776; and the Journals of the House of Commons: Volume 5.

For Piracy in the Indian Ocean, 1680-1710, The Pirate Round, on the website of author Richard Platt. 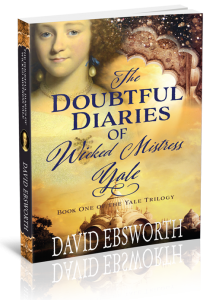 Otherwise, and apart from the resources listed in The Doubtful Diaries of Wicked Mistress Yale, my main research relied on the following:

For Wrexham in the 17th Century, The Chronicles of Erthig on the Dyke by Albinia Lucy (Cust) Wherry, 1914.

For the Politics and Religion of the 1690s, the History of Parliament online website; The Stuarts’ Secret Army: English Jacobites, 1689-1752 by Evelyn Lord; The Devonshires: The Story of a Family and a Nation by Roy Hattersley; The Jacobites: Britain and Europe, 1688-1788, by Daniel Szechi; William Penn’s Essay Towards the Present and Future Peace of Europe by the Establishment of a European Parliament; Letters Illustrative of the Reign of William III from 1696 to 1708, Volume 2 by James Vernon; and John Oldmixon’s 1735 History of England, Volume Three.

For Life in London in the 1690s, British History Online’s Old and New London pages and their Morgan’s Map of London, 1682 as well as the sections on Tyburn, Charlton House, Deptford, Billingsgate Dock and much more; the Booty Meteorological site of Historical Weather Events within the British Library

For changes in the English East India Company, The Good Old Days of Honourable John Company by W.H. Carey.

For more on the Diamond Trade, the research paper, Manuel Levy Duarte (1631-1714): An Amsterdam Merchant Jeweller and His Trade With London by Edgar Samuel.

For Czar Peter’s Great Embassy to Holland and England, Dr. Sarah J. Young’s piece, Russians in London: Peter the Great, though when I began to read other books related to the subject, such as John J. McKay’s Discovering the Mammoth, or Derek Wilson’s biography, Peter the Great, I began to wonder whether the tale of Peter travelling semi-incognito as Peter Mikhailov might not simply be apocryphal, for there does seem to have been a Captain of Peter’s Honour Guard of that same name, as tall as Peter himself, and almost certainly part of Peter’s entourage to Europe. Easy enough for commentators of the time to “romanticise” this coincidence. Also, Arthur McGregor’s 2004 article for the journal The Seventeenth Century (19:1, 116-147), The Tsar in England: Peter the Great’s Visit to London in 1698.

For Elihu Yale and Katherine Nicks, the Yale University Library Manuscript and Archive Collection of letters (more than fifty of them) between them both, beginning in early 1699 and ending with her death, in Madras, during 1709. And much more from those letters, of course, in part three of the trilogy, Wicked Mistress Yale, The Parting Glass. 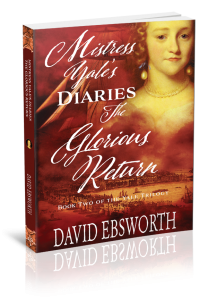 For the Latimer chapters, Rosemary Went’s The History of Latimer: From Roman Times to the Present Day; and British History Online’s Parish Guide: Chesham.

For Female Spies, Invisible Agents: Women and Espionage in the Seventeenth Century by Nadine Akkerman.

For Everyday London Life in the Early 1700s, The English Gentleman Merchant at Work: Madras and the City of London 1660-1740 by Søren Mentz;  author Lee Jackson’s website The Victorian Dictionary; English Hymns and their Tunes in the Sixteenth and Seventeenth Centuries Parks (1957), by Edna Dorintha, Boston University; and The Value of Money in Eighteenth-Century England: Incomes, Prices, Buying Power— and Some Problems in Cultural Economics by Robert D. Hume.

For the Society of the Propagation of the Gospel, a paper by the South Carolina Historical and Genealogical Society and Travis Glasson’s Mastering Christianity: Missionary Anglicans in the Atlantic World, as well as David Brion Davis’s The Problem of Slavery in Western Culture.

For the Bethlem sections. I studied the substantial thesis of Jonathan Andrews, 1991:  Bedlam revisited: A history of Bethlem hospital 1634-1770, though simply as background reading. For the rest, I relied on The History of Bethlem, also by Jonathan Andrews, but with additional sections by Asa Briggs, Roy Porter, Penny Tucker and Keir Waddington; Edward Geoffrey O’Donoghue’s 1915 The Story of Bethlehem Hospital From Its Foundation in 1247; and details from the Bethlem and Bridewell Court of Governors Minutes for 1703, courtesy of the London Lives 1690 to 1800 website.

For the Royal Menagerie at the Tower of London: the Paris Review piece by Laura Bannister, Rare Beasts, Birds and the Calaboose; and The Tower Menagerie: The Amazing True Story of the Royal Collection of Wild Beasts by Daniel Hahn.

For Folklore of the period, including nurseery rhymes, May Day traditions etc: Oral and Literate Culture in England, 1500-1700 by Adam Fox.

For the Battle of Preston, 1715: Lancashire Memorials of the Rebellion, 1715, published by the Chetham Society, 1845; The Last Battle on English Soil, Preston 1715 by Jonathan Oates; Peter Smith’s excellent Preston History website; and the equally excellent Visit Preston leaflet and map for the 1715 Battle of Preston trail aroun the town.; and the Gaelic.Co website and their article on How (Not) to Use Scottish Gaelic in Your Novel: A Guide for Authors by Emily McEwan, Apr 28, 2019.

For 1716 Prison Escapes: Jacobite Prisoners of the 1715 Rebellion: Preventing and Punishing by Margaret Sankey for details of Forster’s and other 1715 escapes.

For the Handel’s Water Music scenes: Handel by Donald Burrows; Handel in London: The Making of a Genius by Jane Glover; and the 19th July 1717 article in the Daily Courant.

For Early 18th Century Funerals: The Funeral in England in the Long Eighteenth Century, a superb thesis submitted by Teerapa Pirohakyl to the Department of Economic History of the London School of Economics for the degree of Doctor of Philosophy, London, January 2015.

For Wills, Births, Marriages and Deaths in general: Ancestry UK.

And that’s without the literally countless other extracts from mainly online websites that filled so many of the gaps. Phenomenal, the quantity of Yale resources. And hugely enjoyable too. Many thanks to all who helped in the research,