My journeys to check out the locations I’ve used as settings for The Song-Sayer’s Lament took me next to Anglesey, which features strongly in the novel. There are some remarkable archaeological sites on the island, all worth a visit, and including: Aberlleiniog Castle (Llangoed); or the burial chambers at Porth Trecastell, Bryn Celli Ddu and Din Lligwy, as well as the hill fort sites below. 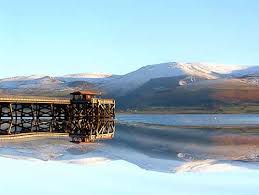 It’s an area I know reasonably well since I used to sail around the island’s waters from time to time, and often from Beaumaris. So that’s where I started my second set of walks. From the pier, you can gaze out across the Lavan Sands to the mainland and, at low water, imagine that it may have been here, first in 60 A.D. and then again in 77 A.D., that the Legions of Paulinus and Agricola respectively undertook their assaults on the Celtic tribes of the island, which the Romans knew as Mona. There’s lots of speculation about where those invasions took place but our only reliable source is the Roman historian Tacitus – and he simply doesn’t describe the location. But, in my novel, there are still folklore recollections of the events and Beaumaris Bay features as Long Battle Bay. I like Beaumaris. Great castle (Edward I). And Beaumaris Gaol. Some nice tea shops too (my favourite is the Red Boat Ice Cream Parlour). 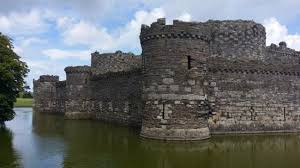 In the Sixth Century, however, this was likely to have simply been marshland (hence the name given to it by the Norman-French builders of the castle, Beaux Marais), with the closest settlement a mile inland at Llanfaes, an important centre for the medieval kingdom of Gwynedd, and site of several bloody battles from the Ninth Century onwards. It’s thought that there must have been a royal stronghold here, with earthworks, though nothing now remains of those.

But I mention in the novel that Long Battle Bay (Beaumaris) stands in the that part of Mona’s Isle (its south-east corner) that I call Mona’s End (Penmon) and close to the fortress of Gazing-Hold. That particular hill fort doesn’t actually feature in the story but I based it on the one we know as Bwrrd Arthur, or Din Sylwy. And it was there I headed next. If you take the B5109 from Beamaris towards Pentraeth, you can turn off on the lane to Llandona and then towards Llangoed. There’s a very prominent aerial mast as you approach and, if you keeping heading for it, you’ll eventually come to the farm over which the mast towers. Just past here, the road turns right and there’s a footpath sign. Parking is difficult but it may be possible to park just

alongside the stile here. When I last visited, there was a footpath diversion in operation, but I was still able to follow the path around to the left, across a field and then up onto the hill fort itself. It’s incredibly impressive. One of the largest hillforts on Anglesey, covering 19 acres, with astonishing views north across Red Wharf Bay and east over the top of Puffin Island (Bright Island in The Song-Sayer’s Lament) to the Great Orme. The whole thing is surrounded by a drystone walls of huge limestone boulders (now mostly sunk into the turf) and, nestling against its eastern flank, is the ancient church of Llanfihangel Din Sylwy.

From Llangoed, I followed the B5109 back to Pentraeth, then on to Llangefni and the A5, where I made for Holyhead. My second hillfort of the day is located on Holyhead Mountain and known as Caer y Twr (Tower Fortress). Again, there’s only a passing reference to the place in The Song-Sayer’s Lament, and mainly for its old Roman watch tower – or possible lighthouse. You can reach the hillfort from a marked path on the South Stack road but I went to the Breakwater Country Park (sign-posted from Holyhead Marina), which is worth a visit in any case. There’s a 5-mile circular walk that takes you to South Stack Lighthouse and back. But if you turn left at the start of the walk, instead of right, you can just do the “end of the walk” in reverse, walking up between dry stone walls and Medieval field boundaries, then up the track to Caer y Twr. The hillfort ramparts can still be seen while, just below, there’s a cluster of hut remains dating from around the Fourth Century. But, once more, it was the views that drew me here. And then lunch at the Holyhead Marina shop and café. Back in Holyhead itself (Legion’s Neck, in the book), I parked the car and went to have a look at the Roman wall still surrounding St. Cybi’s Church. It’s the remains of the Roman fort here – an unusual construction since the fort only had three sides – the fourth being protected by the sea.

From Holyhead, I took the A5 back towards the mainland, but turned off on the road (A4080) for Rhosneigr and Aberffraw – the latter being my fourth destination of the day, though there’s actually no hillfort here either. You can simply drive past Aberffraw and give the village barely a glance. Nothing remains now of its former glories, buried deep below the village streets. Yet, from the 7th Century, this was the capital for the Kingdom of Gwynedd. From even earlier, excavations in the 1970s revealed remains of a very significant Roman fortress. In medieval times, there was a “royal castle” here too, now entirely vanished. So it seemed a natural location for the fortress which, in The Song-Sayer’s Lament, I’ve called Fairwater Maw. I followed part of the Circular Walk that takes you from the old stone bridge (pedestrian), along the river path, out to the estuary, and then up to St Beuno’s Church with the park and playground opposite. It’s easy to imagine that this flat area might once have been the highest part of the old hillfort – though there’s no evidence for this, so far as I know. I took my last brew of the day at the Llys Llewlyn Tea Rooms, then drove through the village on the single track road that leads down to the sea, for a view of the Seventh Century church of Saint Cwyfan – known as “the church in the sea” for its location on an island.

And afterwards? The road back to Wrexham.