I first came across Chilean writer Isabel Allende when I read The House of the Spirits back in the late 80s. A decade later and I fell in love with Eva Luna. Then, fifteen years ago, I was captivated by her retelling of the legend in her Zorro.

Allende and the Chilean Coup

Her father was a first cousin to Salvador Allende, President of Chile from 1970 until 1973. But the President was overthrown and killed in a vicious military coup led by General Augusto Pinochet. In its wake, Isabel was involved in helping those in danger of torture and death from Pinochet’s death squads. This put her on Pinochet’s hit lists as well. And Isabel was forced into exile in Venezuela. She now lives in the USA.

Her personal experiences of repression influence many of her stories. She’s become something of “literary legend.” But it’s her telling of historical fact and fiction that’s maybe her greatest achievement. And, given my passion for the subject, I was always going to be a sucker for her latest. A Long Petal of the Sea is set at the end of the Spanish Civil War and in the decades after. 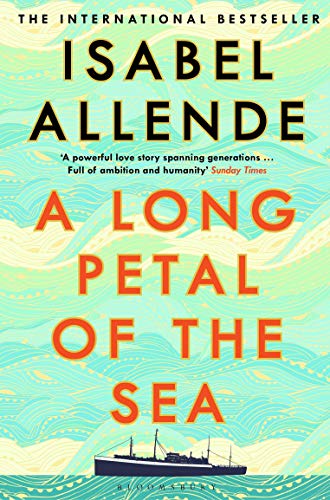 A Long Petal of the Sea

I’d avoided reading the book while writing A Betrayal of Heroes. Just in case I should inadvertently be drawn into plagiarism. But when one of my own USA readers – Mike Croghan – recently recommended it, I finally took the plunge.

It follows the fortunes of several very different characters among the half a million refugees fleeing Spain at the end of the civil war. Allende tells the story of their internment in French concentration camps like Argelès-sur-Mer. Later, their eventual escape to Chile on board the SS Winnipeg with the help of poet Pablo Neruda. But this is really just the beginning of their odyssey – and Isabel Allende’s yarn – leading us to the inevitable irony of Chile in 1973 and its aftermath.

The novel is, at times, harrowing. But there are stunning images as well, that I know will stay with me for a long time. The title comes, of course, from one of Neruda’s poems – and his words provide the epigrams at the start of each chapter. Superb storytelling. Well-paced. A delight!