Stuarts, Salford, the BBC and Bawdiness

I’d been asked to do an interview about The Jacobites’ Apprentice at the new BBC studios in Salford.The day before, I took a phone call from a friend who asked me whether I thought they’d ask me about Salford’s Mayoral candidates. I was non-plussed, and then realised that a former colleague, Ian Stewart, was himself a candidate for the elected mayor’s position. It was therefore a “Stuart” in-joke. Anyway, needless to say, it didn’t come up in the interview and, as history fell out, Ian became the first elected Mayor of Salford.

Instead, Andy Crane (BBC Radio Manchester Drive Time and Saturday Breakfast Show) pressed me with some searching and more relevant questions. How does an ex-union official come to be a historical novelist? Was I aware of the link between Manchester and Bonnie Prince Charlie before doing the basic research? Is it one of those novels that teaches you facts or, rather, simply uses the history to fuel a story? And then this…

Q. You’ve said that the book contains a modest amount of bawdiness. Is it easy to write bawdy literature?

A. It’s a lot easier to write it as David Ebsworth than as myself. That’s partly the reason for the pen name. And I think that a lot of people will tell you the same. That if you write under a pen name, you can write in a completely different way.

Q. Do you become somebody else then? When you’re writing?

A. Of course! Don’t we all become somebody else, put on a different persona, when we go to work?Q. But it can’t have been just the bawdiness that you wanted to write about?

A. Oh, good heavens, no! It was because when I started writing Jacobites, I had this idea in my head that all those Manchester merchants involved in the ’45 were as we would think of modern entrepreneurs. Pillars of society. And, of course, these were actually guys who were up to their necks in all sorts of dodgy stuff. They were manufacturing fustian and other textiles – of course they were. But they were also running the local brothels, the gin houses, the cockfighting pits. And often involved in smuggling.

Q. Tea smuggling, according to the book! How do you smuggle tea? When I think of tea being transported, I think of massive crates. Can you smuggle those? Who was doing it and how? 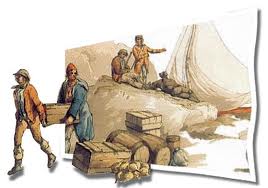 A. Again, lots of those were Manchester merchants who tied themselves into the tea smugglers. The Mersey and the Irwell were navigable all the way to Manchester and they used to bring in shipments of tea upriver, store the crates in warehouses near Quay Street. At the time, tea smuggling was as profitable and criminal as cocaine and heroine smuggling would be today. It was a pretty vicious industry. When I was developing the story, the television series that was grabbing everybody’s attention was “Deadwood”, and the more I watched it the more I thought, My god, Manchester in 1745 looks like Deadwood!

My thanks to Andy Crane and his editor for hosting the interview – and thanks also to the various listeners who turned up later in the day for my book signing at Waterstones in the Arndale Centre. 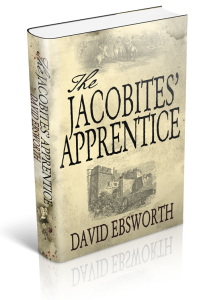 David Ebsworth’s début novel, The Jacobites’ Apprentice, is set in England during 1744-45.

The whole country is threatened once again by civil war as the exiled Stuarts attempt to recover their lost throne.