At Sueca, in that old Valencian town, they showed me to the stone which bears his name. Granell – and then the date on which he died. A carved palm frond and bold insignia. The letters S, then L, small D, and H. Society of the Légion d’Honneur. A Spanish paladin of France, it seemed.

You’ll want to know the story, I suppose. So, sit with me and share a glass of wine.

A socialist – mechanic by his trade. Repairs of motorbikes. A wife and child. In Orihuela, to the south of here. A hotbed of Republican ideals, all shattered by the generals’ revolt. By Franco, Mola and the rest of them. The papers spoke of wild atrocity, and terror bred more terrors of its own.

Amado joined the army’s loyalists, to fight the rebel forces of the coup. Militias from the factories and fields, or foreign volunteers from far away, to face Falange, the Carlists and the Moors. Italian ground troops, Hitler’s bombers, too. Yes, Franco’s allies, Europe’s Nazi scourge.

And so, they fought alone, or almost so.  Defend Madrid, they cried. ¡No Pasarán! And died in droves. Jarama. Teruel. The Ebro, as the final curtain fell. 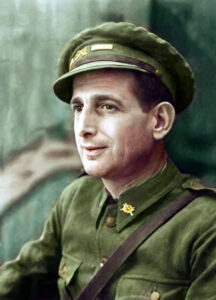 Like thousands more, he knew what lay ahead. The death squads, Franco’s foul despotic rule.  A major now, his rearguard took him south, to Alicante harbour and escape. Aboard a British steamer, to Oran, in French Algeria he found himself. Not welcome though – a refugee, of course. Like countless more, held in internment camps. Disease and death or forced to work like slaves. And then the war in Europe flashed afresh, Hitler and Mussolini still unchecked.

Yet, three years on, he managed to escape, to join the French Resistance and De Gaulle, enlisted in Leclerc’s new armoured corps. Lieutenant to a Spanish Company, all blooded veterans of their civil war. Unfinished business drove them to their cause. And promises that when this fight was done, when Europe’s Nazi threat was crushed and past, there’d be a reckoning with Franco too.

His Company, La Nueve, trained at last, were sent to England – Pocklington, in fact. And then to Normandy and the bocage. Écouché and a dozen battles more. Until, in August, Forty-Four, they neared the Paris suburbs, almost on their own. The first to fight their way into the streets, help liberate the city – Spanish troops. 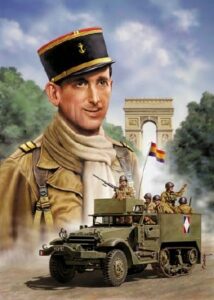 And thus the honour, and the Croix de Guerre. Yet, still the exile, with the war now done, he opened up a restaurant near the Seine. He and his comrades, now betrayed once more – those Allied promises for Spain unfilled. So many years before he saw his home again. With Franco still in power, and still intent on seeking out old enemies. Revenge.

Amado left his Alicante home, the long drive to Valencia and back. A witness saw it happen, saw the truck, which swerved across the road to crush his car. At Sueca, in that old Valencian town.