In Sixteen Eighty-Nine we passed a law – a Toleration Act to guarantee our right to think and worship as we will. A necessary law. To compensate for many centuries of wicked crimes. Four hundred years since our Edward the First required a scapegoat for his mis-spent reign. The Jews. No logic. Just a mass of myths. And so, they died. In massacres. In flames. In London and at Clifford’s Tower in York. And finally that Hammer of the Scots, the first King Edward, expelled every one. Twelve Ninety and an Edict drives them out, away from England’s shore to God knows where! 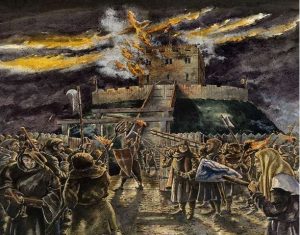 Three centuries go by and Mary’s queen – the daughter of our famed Henry the Eighth – a woman with a literal axe to grind against the new-found faith of Protestants. At least three hundred people burned alive in market squares. A public spectacle. That’s sixty dead for each year of her reign. Whole families committed to the flames. For this we call her Bloody Mary still.

Reprisal is an awful thing, of course. But then, when Mary’s sister takes the throne, our Good Queen Bess hates Catholics instead. And thus we must all learn to hate them too. Three hundred seems the number yet again – through forty-five Elizabethan years – burned at the stake and martyrs now to Rome. Yet added to her father Henry’s score – for Henry burned at least four hundred more. 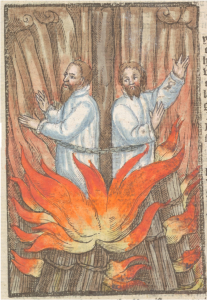 But was there not some unifying foe – for Protestant and Catholic both to hate? Of course! The wicked hags of children’s tales. The women brewing beer in place of men. With pointed hats and cauldrons full of ale. And those defying Church with healing skills. Temerity to worship older gods. So, History and Church gave them a name. The witches. Yet more fuel to the fires of raw intolerance, its lists of names. And burned or hanged, it didn’t matter much. For fifty thousand women paid the price. In Europe. Here a thousand more were killed. And under Good Queen Bess, the Virgin Queen – yes, more died on her watch than other times. 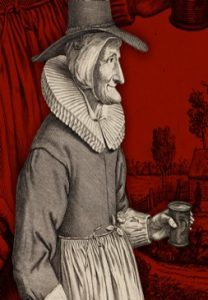 Then others in the decades still to come, until it’s plain that something must be done. A Toleration Act, first of its kind. Protection for minority beliefs – excluding still the Catholics, of course. Though, even there, at least the killings stop. Enlightenment of sorts, which later spreads across the continent of Europe’s lands. Refined, reformed and finally repealed, and equal rights for Catholics in the end.

Yet here, today, intolerance reborn. Our thirst for scapegoats never ends, it seems. But now it’s not beliefs or faith per se – though maybe not so different after all. They’re victims yet of superstitious lies, these migrants, refugees who find our shores a safer bet than those they’ve left behind.

And those in power still want us to fear, to blame some innocents for all our ills, instead of blaming them, as we should do. In place of tolerance, therefore, new laws. An Edict of Expulsion, if you like. To send our refugees to God knows where. Our modern era’s take on Wandering Jews. So maybe we’ll let History decide the worst of Britain’s persecutors, then. 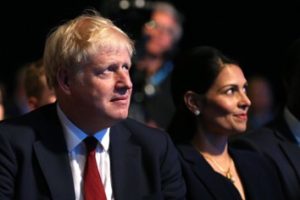 But never make the error of belief that persecution’s ever gone away, and those who see migration as a sin are just the persecutors of today. 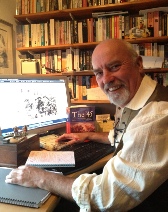