The story of Elihu Yale as you’ve never heard it before! 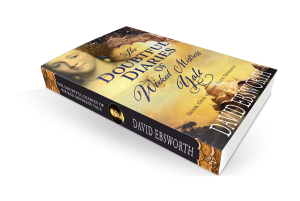 It was a chance meeting. Our local Wrexham MP Ian Lucas asking me if I’d ever thought of writing a story about our local historical celebrity, Elihu Yale. Yale has a very fine and famous tomb in the grounds of St. Giles Parish Church and is taught to Wrexham school kids as the philanthropist who bequeathed some of his wealth, and his name, to help found one of the world’s most famous universities, in New Haven, Connecticut. But I knew enough else about Yale to understand that, while he may have been the original nabob, he also made much of his wealth through the Indian slave trade – and thus he didn’t interest me much as a protagonist for a novel. But life’s never that simple and, out of respect for Ian’s own interest, I decided to dig a bit deeper.

It’s a curious thing, writing historical fiction. Definitely an element of karma about it at times and this was no exception, for I almost immediately, and almost by accident, then stumbled on a copy of Elihu Yale’s will, sent to me from the National Archives. And a remarkable document it turned out to be. This entry, a single line: To My Wicked Wife… And then? Nothing. No bequest. Not even her name. Simply a large blank space.

So who was she? And why so wicked?

Catherine Yale gets barely a mention from Elihu’s biographers

In the biographies of Elihu Yale, Catherine gets barely a mention, and whenever she’s mentioned the facts are invariably wrong. It took me a long time to piece together her story. So that I think I now know all there is to know about Mistress Yale. And, while I can’t be entirely certain why Elihu chose to brand her his “wicked wife”, I’m pretty certain we’re close to the truth. Enough, at least, to convince me that Ian Lucas might be right, that Elihu Yale’s story might indeed be worth telling. But perhaps through the eyes of his much-maligned and almost forgotten wife, Catherine. Not a novel though, but a trilogy, the first part of which hits the streets this coming April.

1721, and elderly Catherine Yale discovers that her second husband Elihu has left her nothing in his will except the slur of naming her a “wicked wife.” True, her private journals are filled with intimacies: her inner thoughts about life in Old Madras, where the East India Company’s intrigues are as complex as any in the Mughal Emperor’s court; about the conflicts she must endure as a mother now to the additional children she conceives with Elihu; about her role as a spy for the political factions determined to prevent a Catholic succession to the English crown; and about the realisation that she is now wed to a husband she is quickly coming to despise.

Yet these past fifty years, since the early days of her short and tragic first marriage to darling Joseph, the diaries have been kept safe and secret. Or have they? Perhaps it’s time to read them afresh, to go back before the days when Elihu first betrayed her, before she was betrayed also by the East India Company women who should have stood at her side – before she wreaked her own special revenge on them all.

A lot of the Elihu Yale story is pure fiction but all Catherine’s family background is authentic.

The novel, my seventh, is now available thanks to a successful crowd funding campaign in which readers were able to pre-order copies. That’s nothing new, of course. It’s exactly how writers like John Milton and Mark Twain (plus countless other authors between the 17th and 19th Centuries) always worked. They had to fund their own books, Paradise Lost and The Adventures of Huckleberry Finn, through ‘subscriptions’, taking pre-orders to cover the publication costs.

I like to write historical fiction in a particular way. To bring some lesser-known but important periods and incidents to a wider public. In this case the story of nabob philanthropist Elihu Yale yet a very different story from the one we think we know. Yale the Indian slave trader. The philanderer. The usurer.

But apart from raising the publishing costs, crowd funding for authors like me has another serious advantage. It’s great to have people “invest” in the book by ordering copies in advance. Because this is proper market-testing, proving that there’s real interest in the story. And, just like the subscription books of old, those who help to see it published get the recognition they deserve. By having their names listed in the Acknowledgement sections of the book itself. 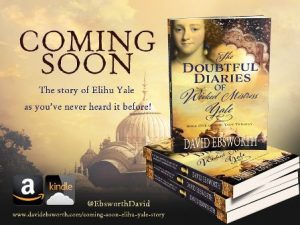