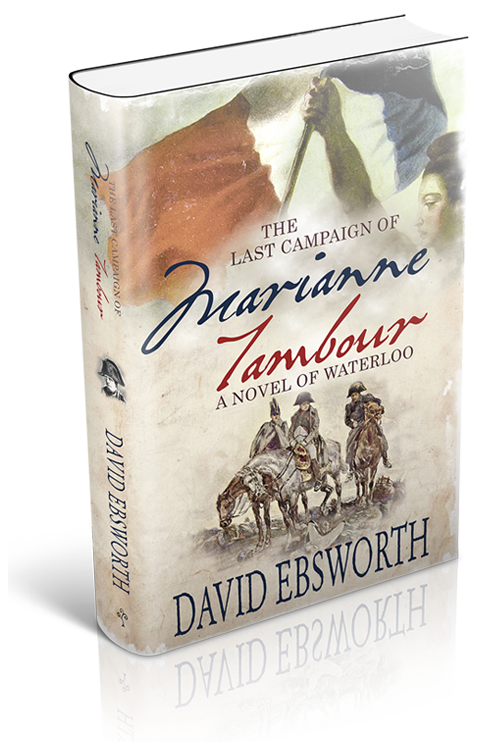 My fourth novel is set during the final days of the Napoleonic Wars. It tells the story of the Waterloo Campaign from the perspective of two French women who fought on the battlefields of Gilly, Ligny, Quatre Bras, Genappe and, of course, Waterloo itself. Like all the previous books, this one is full of action and intrigue set against a carefully-researched historical background.

On this occasion, I owe a huge debt of thanks to all those who supported the crowd-funding project that helped bring the book to publication – all those who signed up for the rewards, or to pre-order a copy, or to help “spread the word”.

June 1815. Bonaparte has returned from Elba and marches with his army to defeat the Prussian and English enemies of France. Within his ranks is Marianne Tambour, a battle-weary canteen mistress for a battalion of the Imperial Guard’s Foot Grenadiers. Just one of the many cantinières who provide the lads with their brandy and home comforts, both in camp and also in the thick of the fight.

Marianne is determined that, after this one last campaign, she will make a new life for herself and her young daughter, since neither of them has ever known anything but the rigours of warfare. But she has not reckoned on the complications that will arise from a chance encounter with another of the army’s women, Liberté Dumont – Dragoon trooper and sometimes spy for the Machiavellian French Minister of Police, Fouché. And Marianne wonders what she really wants, this hawk-faced trooper with her visions, dreams and fancies.

Yet, for now, Liberté Dumont is the least of Marianne’s worries. Her position as canteen mistress has not been easily won and she has made enemies in the process. Lethal enemies. And creating a new life, breaking with the army, needs money. Lots of money. So when Hawk-face Dumont accidentally provides an opening for Marianne to rid herself of a dangerous rival and also extends the possibility of fortunes to be made, it looks like an opportunity too good to be refused.

The battles that both women must survive, however, at Ligny and Quatre Bras, create their own problems. The closer they come to the English Goddams, the more Marianne is haunted by the memory of the way her adopted mother was butchered at their hands just a few years earlier, in Spain. Thoughts of revenge torment her, distract her from her goals. But her daughter’s capture by the Prussians, and Liberté Dumont’s help in the quest to find the girl creates new and very different bonds, between mother and daughter, and between the two women themselves.

The climax will take place on the blood-soaked fields of Waterloo, where Marianne Tambour and Liberté Dumont must each confront their deadliest foes, their worst nightmares, find answers to the secrets of their respective pasts, and try to simply survive the slaughter. Yet the fortunes of war are not easily won, and the fates may, after all, only allow one of these women to see the next day’s dawn.

David Ebsworth’s story, The Last Campaign of Marianne Tambour: A Novel of Waterloo, is based upon the real-life exploits of two women who fought, in their own right, within Bonaparte’s army.

“Superb! David Ebsworth has really brought these dramatic events to life. His description of the fighting is particularly vivid and compelling.” (Andrew W. Field, author of Waterloo: The French Perspective and its companion volume, Prelude to Waterloo: Quatre Bras)

Includes a Battlefield Tour Guide for those wanting to follow the route taken by the story’s main characters or to visit the sites of the 1815 Waterloo Campaign.

And here’s an article I wrote recently Meet David Ebsworths Napoleonic Women Warriors, for the blog of fellow-author Alison Morton on her Roma Nova site…

…which explains the real-life stories that inspired the novel.