Jávea (Xàbia), on Spain’s Costa Blanca, has the distinction of being one of the last places to be occupied by Franco’s fascists during the final days of the that country’s Civil War (1936-1939). But it had seen action much earlier too.

Jávea, then just a small fishing village on the Mediterranean coast, was in Republican territory and an airfield with two runways was built close to Camí Cabanes, an obvious target for Nationalist forces aided by the Italian Aviazione Legionaria and the feared ‘Condor Legion’, a unit composed of volunteers from Germany’s Luftwaffe who developed the tactic of “terror bombing” to destroy civilian morale, of which the bombing of the Basque town of Guernica became the most infamous example.

To try and counter the air attacks, often launched from airfields in the Balearic Islands, as well as provide protection for Republican ships navigating along the coast, a network of air-defence installations was created along the coast. Beginning in the north, there was a bunker located on the western harbour wall at the northern end of the La Grava beach whilst another bunker was built on the Benissero beach, the gravel close to Bar La Siesta, both of which have long been destroyed, although photographs show that they were still visible in the late 1940s and early 1950s. Two further bunkers were located along the coast above the old tosca quarries of the Muntanyar I and in front of the El Cisne apartment block and the Clot de la Reina near the Parador hotel. They were still there in the late 1990s before being demolished and only clumps of vegetation seem to suggest their locations. There were a number of coastal observation points along the bay of the Arenal and at Portitxol there was a large thick-walled artillery battery some 90m above sea level which protected the bay of Jávea.

The airfield, bounded by the roads of Cabo de la Nao and Camí de Cabanes, had two runways of

1,000 metres and 920 metres long, running almost perpendicular to each other. The airfield accommodated a number of Soviet-built Polikarpov I-15 biplane fighters – known as ‘Chatos’ because of their snub-nosed design – and it is thought to have been protected by machine guns positions on the heights of Rebaldí.

On July 23rd 1938, Italian Savoia-Marchetti SM-79 Sparviero bombers based the Balearic Islands attacked the port facilities at Dénia and the airfield at Jávea where bombs fell in several places: those from the lead plane landed close to the channel of Fontana and the Arenal beach whilst those from the second killed a mule and injured a farm owner and his son close to the junction where the Jávea Tennis Club is located today. A third plane dropped its payload into the orange groves and vineyards on the very edge of the airfield. In total, some 36 bombs were dropped on Jávea, causing just two injuries and a dead mule.

Towards the end of March 1939, following the Republican defeats at the Ebro and in Cataluña, Franco was able to launch a final offensive against Madrid – they occupied the capital on 28th March – and the Valencia region. On 29th March, the fascists occupied Jaén, Ciudad Real, Albacete and Sagunto. 50,000 Republican refugees gathered at the harbours of Valencia, Alicante, Cartagena and Gandía, but without the Republican navy, an evacuation was almost impossible and the French and British governments refused to organise an evacuation. 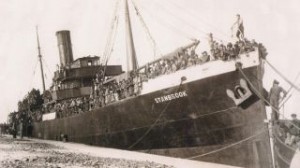 However, the British merchant ship, SS Stanbrook, with her 24 crew, took part in the last evacuation of local refugees from the port of Alicante.

As it happens, a full year earlier than this, with the conflict still very much in the balance, Franco had begun to organise the War Routes of the North, battlefield tours to entice foreign visitors to Spain as part of his propaganda machine. And, between July 1938 and the summer of 1945, he succeeded in attracting huge numbers of tourists from all over Europe and as far away as Australia. By that time there were four separate tours available – along the North Coast, Madrid, Andalucía and Cataluña. But that, as they say, is another story.